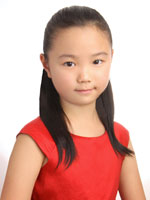 Born in 2002 at Yokohama City in Japan, started learning the piano at the age of five.

In 2010, she won 1st prize at The 35th National Machida Piano Competition along with ”Jury's Special Award”.

In 2012, she won 1st prize in Elementary 3 & 4 category at The 2nd All Japan Beethoven Competition, and won “Audience Award” at the youngest in The 66th Student Music Concours of Japan.