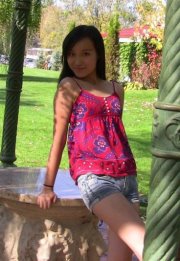 Hannah Shen （申含卉）was born in 1996 in Nanjing, China and began her piano studies at the age of five. She is currently a scholarship student at the Young Artists Performance Academy of the Royal Conservatory of Music in Toronto where she studies with Li Wang. Hannah has made some incredible achievements in 2011, which include a performance at Carnegie Hall in April 2011 after obtaining a gold medal in The American Association for Development of the Gifted and Talented (AADGT) International Young Musicians Festival; been invited to participate in the prestigious international summer program - Morningside Music Bridge in Calgary . She has had masterclasses with world class pianists such as André LaPlante, John Perry, Lee Kum-Sing, Krzysztof Jablonski, Marc Durand, Robert McDonald, David Moroz, James Anagnoson and Jay Pengjie Sun. She was also a top prize winner of the Toronto Sinfonietta Concerto Competition (2011).

Additionally, she has won numerous awards at various competitions: four first places and scholarship in the Senior Group of Pickering Music Festival 2011; and has also won the Best of Sonata of the year. Meanwhile, she was recommended to compete in OMFA provincial round due to her outstanding performance in the festival. She also won the Grace E. Lawson Award for Senior Artistic Performance of the year in the Toronto music Festival. Many other first places and scholarships were won at other local festivals such as Kiwanis, Markham and Yips. She was one of the few finalists chosen from all over Canada to compete in the once every-five-year Canadian Chopin Competition (2010). She has also performed in Massey Hall (2010) and P. Co. Theatre (2010). Currently, she is in the French Extended program and enjoys singing, playing chess and violin.