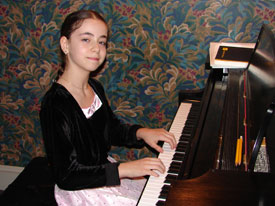 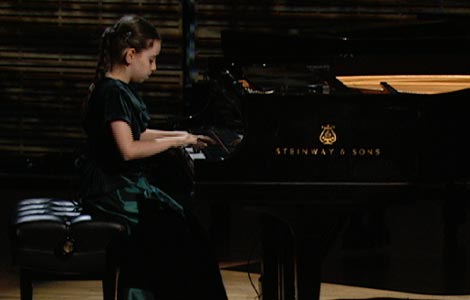 By any standard, Alice Burla is an accomplished musician. The pianist, a student at the Juilliard School of Music, has mastered difficult pieces by Beethoven and Chopin, won a national competition in Canada and performed at Carnegie Hall. But if such accomplishments would be a fitting reward for a decade or more of intensive study, they are for Alice, a mere beginning. She is only seven years old.

Alice, the daughter of Soviet immigrants, was born in Canada, where her family landed after emigrating from Donetsk, Ukraine, in 1990. Her parents’ decision to leave Toronto, where they finally had acquired citizenship, in pursuit of Juilliard and the American Dream would seem quixotic if not for their daughter’s tremendous talent.

“I’m a crazy Jewish mom,” Alice’s mother, Nely, admitted in an interview with the Forward. “Everybody was telling me, ‘Don’t go; you’re crazy.’ But I said to my husband I want to give her opportunities, so we dropped everything and came.”

Their path has been littered with obstinate immigration officials, lawyers and scavenged furniture. After Alice was accepted to Juilliard in the spring of 2003, the family put all their belongings in storage and set out for the UnitedStates, only to have Alice’s father, Marat, stopped at the border for reasons that have still not been explained to them. Nely came alone with Alice and Alice’s 15-year-old brother, Konstantin, and the trio spent five nights on a neighbor’s floor last January after the pipes in their apartment burst.

But when Alice plays, those difficulties seem to melt away. Her current program, a full half-hour of fast and furious music committed to memory, has a level of difficulty appropriate for an accomplished adult. At a recent concert, held to raise money for next year’s Juilliard tuition, her small hands darted across the keyboard like spiders, and then hovered like butterflies pulsing their wings. The only signs of her tender age were a silver bow in her hair, a booster seat used to reach the keys, and a sheepish grin that crept across her face with each wave of applause.

“The fact that she’s at such a young age and can technically perform at this level is amazing, “ said Stan Zielinski, a representative from Yamaha. “She has a lot of natural musicality; the shaping of the melodies is very special. It’s all natural, it comes from her, her vision for the music.”

With such innate talent, it is not surprising that Alice comes from a family rich in musicians. Her grandfather played first violin for a Ukrainian symphony, Marat is a piano teacher and technician, Nely has a doctorate in performance piano and Konstantin is a budding composer.

That crew — now reunited with Marat and living in Hastings, N.Y. — looks back with pride on Alice’s first year at Juilliard, even as they struggle to stay afloat. Since no one has been willing to sponsor Marat’s application for a work visa, their only income is from the piano lessons that Nely gives. And even though the bulk of their belongings remain in storage in Canada, the Burlas recently had a tag sale to raise money for daily living expenses.

The music community, in turn, has rallied around them. Melissa Manning, the director of the Manning School of Music in Nyack, N.Y. — who was admitted to Juilliard’s pre-college division at age 13 — held a benefit concert for Alice earlier in the summer. And Manning’s efforts attracted the attention of Yamaha’s outreach program, which donated the balance of Alice’s fall Juilliard tuition and helped organize last week’s fund raiser at Frank & Camille’s Fine Pianos on Manhattan’s Upper West Side.

For now, at least, that bit of help is enough for the Alice, who shows no signs of weariness. She took part in a young artists’ showcase at Carnegie Hall earlier this summer and is now hard at work on new material.

Born in Canada, Ms. Burla made her New York debut at Weill Recital Hall at Carnegie Hall after winning First Place in the 8th Annual New York Music Competition and First Place in the National Finals of the esteemed Canadian Music Competition. Her parents brought her to the US to study with legendary pianist Oxana Yablonskaya. Ms. Burla, at the age of six, became one of the youngest students ever accepted to The Juilliard School Pre-College Division. At her young age, Ms. Burla has already performed to acclaim in major concert halls all over the world including in Paris, Toronto, New York, Monterrey (Mexico), Heidelberg (Germany), and Hamamatsu (Japan).

"Alice Burla has the kind of hold on an audience one rarely sees," says James Steeber, Director, Yamaha Artist Services, Inc., in New York. "She brings an improbable sense of control and technical expertise to her performances, plus she seems to adore music."

Yamaha's relationship with the young artist began in 2004, when the company learned of the difficulties faced by the talented pianist and her family. Recognizing her unusual talent, Yamaha helped support Ms. Burla's Juilliard School tuition and sponsored a fundraiser hosted by Yamaha retailer Frank & Camille's Fine Pianos on West 57th Street in New York. The event assisted the family with living expenses as her parents Nely and Marat, also musicians, awaited finalization of their work visas.

One of Ms. Burla's recent highlights was her March 2008 participation in the renowned 13th Hamamatsu International Piano Academy. There, she had the opportunity to perform and work on her repertoire with many of the world's leading piano professors including Sequeira Costa, Hiroko Nakamura, Yamaha artist Oxana Yablonskaya, Piero Rattalino and Sergei Babayan. While in Japan, Ms. Burla also had the opportunity to tour the Yamaha grand piano factory where the famed CFIIIS Concert Grand Piano is constructed.

Ms. Burla appreciates the outstanding sound quality and touch of Yamaha pianos. "I always preferred Yamaha because it feels like home," says Ms. Burla. "The sound of a Yamaha piano is really pretty, bright and even. No matter where you are in the keyboard, it's always well-balanced."

A major milestone in Ms. Burla's musical life occurred in February 2006, when she, together with her teacher and mentor Ms. Yablonskaya, performed Mozart's Double Piano Concerto with the New York Sinfonietta under the baton of Ki-Sun Sung as part of the concert series commemorating Mozart's 250th Birthday at Yamaha's New York Piano Salon. Last October, Ms. Burla showcased her own composition skills in a memorable performance that was part of the piano concerti series. There, she performed J.C. Bach's Concerto in B flat major with two of her own cadenzas, accompanied by the Manhattan Chamber Orchestra, conducted by Richard Clark.

In February 2008, Ms. Burla displayed her extraordinary talent with a brilliant performance of J.S. Bach's Goldberg Variations, one of the most difficult creations of the composer, along with virtuoso pieces by Prokofiev and Rachmaninoff. The concert, also held at Yamaha's New York Salon, proved to be a major accomplishment for Ms. Burla, given the extremely difficult program she prepared so skillfully.

Currently, Ms. Burla is continuing her studies with Ms. Yablonskaya at the Juilliard School and is being home schooled by her mother. With the support of Ms. Yablonskaya, her parents and Yamaha, the young pianist looks forward to a bright future.

"It feels exciting to be with Yamaha officially," adds Ms. Burla. "I've always liked it best."

A short video from our new PBS program From the Top: Live from Carnegie Hall. Visit http://www.pbs.org for more info.