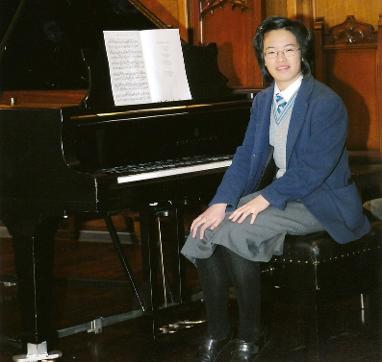 Born in Paisley, Scotland, Elaine Yu started learning the piano at six and a half years old. At age seven, she was the youngest participant of the summer music workshop at Brian Laurie's Academy. Her performing career also began at seven years old where she performed at Glasgow Music Festival.

At age eight, she was one of three pupils out of her class that were handpicked to sing in the National Youth Choir of Scotland. At the same age, she was also one of four pupils out of her class that was handpicked to learn the violin. This led to frequent performances at concert halls and school assemblies. Elaine also performed violin alongside her classmates at primary 7 graduation day.

At eleven, videos of YouTuber pianists inspired her to work harder on piano-playing. Helped by her father, videos of her playing mostly self-taught classical pieces were posted. YouTube also influenced her song choices and emotive playing style. At thirteen, she was featured on The Herald and The Evening Times for having won second place at Glasgow Music Festival's Piano Solos A category, despite being the youngest competitor. At fourteen years old, she won second prize at Biggars' Music Competition in the grade 6-8 category. This led to a feature in Hutchesons' Grammar School's prospectus and online website. By choosing Music as a subject for her Standard Grade exam, she achieved a 1 (meaning an A). Two years later, she achieved 100 percent for the piano discipline in her Higher exam. Throughout her childhood and teen years, Elaine has performed at local concerts, festivals, competitions, restaurants and friends houses.

In 2014, artist Luke Jerram's project, 'Play Me, I'm Yours' was introduced to Glasgow. The project was to install pianos on the street so that pianists who passed by could perform. A video of Elaine's performance was posted on YouTube and it accumulated 1.6 million views within a year. Inspired by 'Play Me, I'm Yours', Tom Binns created Glasgow Piano City. Elaine then performed on many of the pianos in different locations, including The Lighthouse, Glasgow Royal Concert Hall, The Unexpected Artist etc. Tom Binns also created Lids' Open Day where pianists get a chance to play on a Steinway grand piano at Mackintosh Queen's Cross. Elaine has performed there on a few occasions.

Elaine's piano playing has been complimented by Britain's Got Talent's third place winner, Kieran Gaffney. In 2016, Elaine made an online collaboration video with fellow YouTube musicians.

Where did you grow up, and how did this influence your writing?
I grew up in Paisley, Scotland. Growing up, I read encyclopaedias, books by Roald Dahl, Michael Morpugo, Malorie Blackman and Rick Riordan. Reading online articles about different topics also influenced my subjects of writing.
When did you first start writing?
At twelve years old, I started writing an online blog about my piano journey.
What's the story behind your latest book?
It's a poetry book about a variety of topics.
What motivated you to become an indie author?
I just wanted to publish a book and share my writing with the world.
What is the greatest joy of writing for you?
Being able to share my innermost thoughts and important messages with an audience.
What do your fans mean to you?
They mean everything to me.
What are you working on next?
A fiction trilogy.
When you're not writing, how do you spend your time?
I spend my time hanging out with friends, reading, painting, playing tennis, table tennis, badminton, composing and playing music.
Do you remember the first story you ever wrote?
I was five years old, in school, I wrote a story about building a rocket and flying to the moon with my dad.
What do you read for pleasure?
Mostly sci-fi and fantasy books.
What is your e-reading device of choice?
Kindle.
Published 2018-08-24.